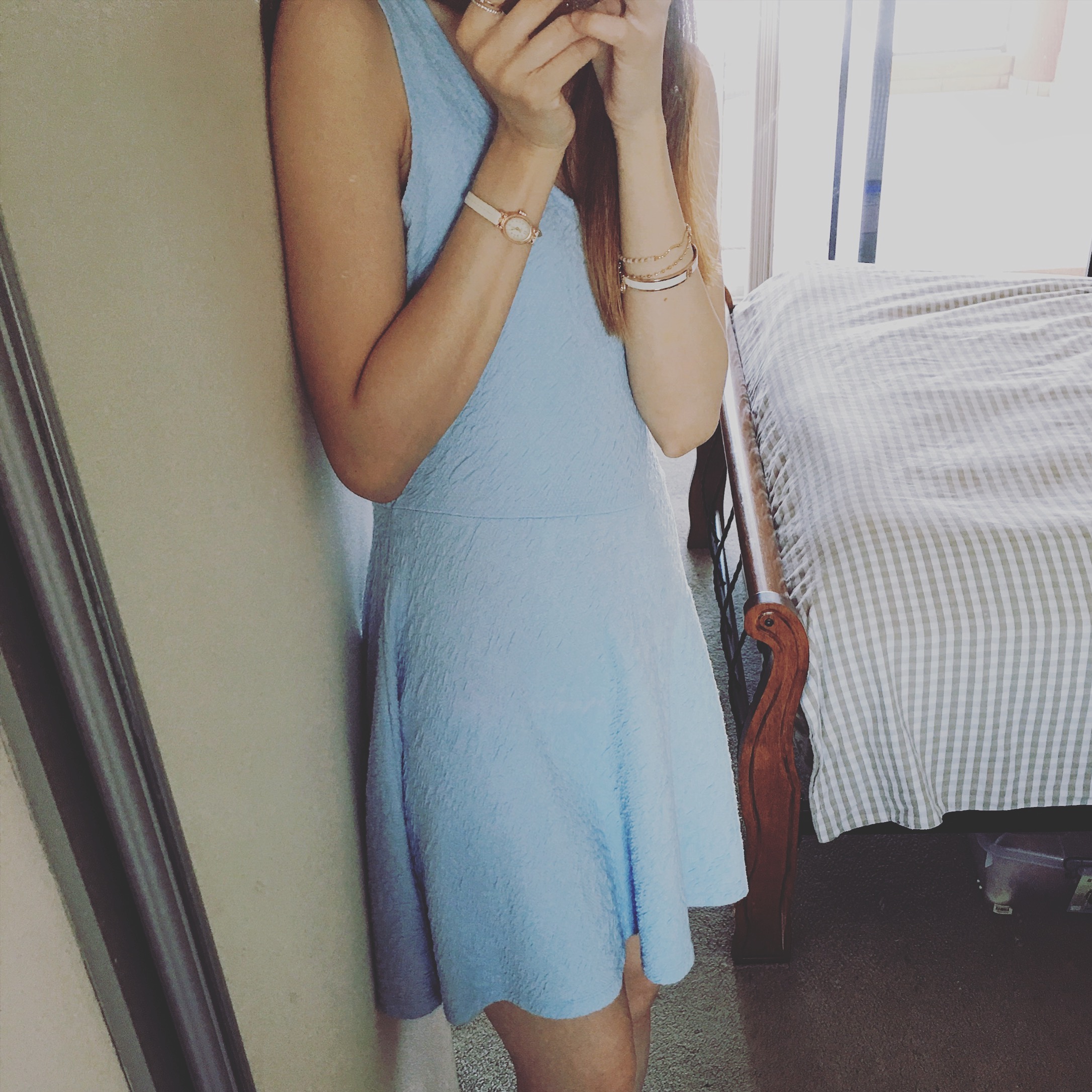 It was the opposite back then: I was always a pink girl. When I was the age girls are when all they want to do is become a princess, and so make up for their lack of birthright by dressing up thus, I wanted everything pink. Pink for my Barbies and me. Pink stickers, pink toys, pink hairbands and clothes. Of course, my complexion means that pink is one of the most unflattering colours on me, but I was about aesthetically aware back then as a pig is of the day of the week today happens to be.

Fast forward to the mid-2000s and you find me in high school, still adoring pink, now the colour of kawaii because I was madly in love with Japan and everyone and everything to do with it. This love for pink lasted well into 2007 or 2008, I am ashamed to admit. I will always love Japan though.

I was a top student and had performed extraordinarily well in the HSC, but at the same time a truckload of traumatic things (problems at home, anxiety, destructive coping mechanisms) had happened so by the time uni began I was exceedingly emo, cue retrospective cringe. With emo—I called it gothloli, short for gothic lolita, a Harajuku subcultural fashion trend whereby girls thrive on dark but cute and frilly, Victorian-style garments—came angry reds, moody purples, and, of course, a whole heap of black. So much black that I could not tell where one garment ended and another began in my wardrobe of doom. All was dark and hopeless, or so I thought. I listened exclusively to Western goth, punk, and emo rockers as well as Japanese visual kei (think Japanised glam rock) bands and singers; the thing they all had in common was hardcore lyrics about death and dejection, which I  hello, totally felt to the core. This is all very dire and funny now but in 2010 I had just recovered from the eating disorder that plagued my final year of high school and taken, in its stead, to frequent bouts of self-harm, the very visible scars from which still line my wrists.

This—the fashion and the severity of my issues—lasted till mid-2012, around the time I discovered that I, a card-carrying twenty-something, liked One Direction. Please spare your laughter and, if you can, some change: I could use some help getting back all the money I spent on now-useless merchandise, including, I shit thee not, a life-sized Harry Styles cardboard cutout that stood in everything’s way in my room until it was finally relocated to storage for good. How did one go from Gerard Way, patron saint of pain, to Harry Styles, Cheshire chap with the cute curls? I must have been on the road to recovery. As always, my costume and identity changed with the music, things, and people I was into. With One Direction came a much-needed burst of colour, and in came rich hues of red, brown, green, pink (pink! dress now gone—did not match my complexion after all), and blue, inspired by the lads’ adorably coordinated tricolour outfits and fashion trends at the time, the onset of hipster-mania. I was still at uni then, yet to become the indie chick slash vintage/retro-addicted loon that I am today. I fangirled over a mainstream boyband, for crying out loud.

In my defence 2012 was also the year I found Lana Del Rey after coming across her “Summertime Sadness” music video. I have always liked old things, or things that looked or pretended to be old: an abandoned grand piano in a dusty Japanese music video here, a Victorian manor in a manga or anime there. Their real world counterparts excited me further still, stimulating fervent imaginings based on impressions left by the once-living on abandoned buildings and objects. Just one look at a fading facade with vanishing words and the cinema reel in my head roars to life, bringing me flickering, black and white pictures of men and women in Edwardian garb, entering a factory, walking their children to school…Old, weary souls with a penchant for nostalgia, regret, melancholy, and the downright dark and morbid tend to find each other and when they do one becomes a friend or fan of the other, sometimes both, but in my case always the latter. I call this emolocation: echolocation for emos, enabled by shared emotional wavelengths, predominantly transmitted via music.

So the seed was there, waiting for the precise moment to flourish in soil ripe for sad music, sadder musings, and saddest of all the urge to escape the present. That moment came the second I watched Lana Del Rey plunge to her death. The music video, centred around a lovers’ suicide, was captured through an app that simulated shaky old camcorders. The filter was sepia and the singer stood atop a hill in a dreamy white dress, her arms spread like Jesus right before that picturesque fall: He died for us, she died for love. Love, however present, always unfolded in the past in Lana Land, pungent with sultry longing. After sampling the other songs, all of which had artful or melancholy-sounding names, I downloaded the album immediately. Born To Die completely changed me: suddenly I was intoxicated by ’50s and ’60s Americana and could not remember a time when I was not.

2012 was also the year I watched The Perks of Being a Wallflower, an indie adaptation of Chbosky’s YA novel with the sickest of soundtracks. Speaking of sickness, a distressing health problem the following year prompted a brief relapse, though it burned out quickly. I will always be slightly triggered by the likes of thinspo, but not enough to act on it, not when anxiety, that cruel, invisible disease, is already shredding the threadbare fabric of my wretched existence day and night, saw in sadistic hand (all inside my head!). Music helps, as it did then. And books, and art.

Then came 2014: the year of Tumblr. The now oft-ridiculed left extremist microblogging site, at its fandom, political, and subcultural height back then, introduced me to a rave new world in which endless images and GIFS of Sherlock, Loki, and the posh Britons who played them baited (I bit, hard), while aesthetic blogs devoted to indie subsects like grunge, disposable, pale, glowing, pastel goth, and mermaid reawakened the old tendency in me to dress for the part and the music, except this time I had a huge palette to represent my identity: retro pastels, bold black-white-brown-blue configurations, dark and pale denims, rich olive greens, mustard yellows, pumpkin oranges, deep wine reds, white, gold, and ivory: you name it and the colour adheres to one indie style or another. This being on Tumblr coincided with my discovery, since The Perks of Being a Wallflower two years ago with its addictive soundtrack, of more and more indie artists (Arctic Monkeys, Jake Bugg, Hozier, Marina and the Diamonds, etc.) on and off the site, so I transitioned from the razor-sharp despair of emo into the soft sadness of indie like ice to water: same composition, different form.

Out of genuine love for the music, the aesthetic, and the desire to once again visibly belong to a subculture, I began to acquire indie cred by purchasing vintage vinyls, retro decor, and choice outfits. I told everyone I was indie and dressed in all the right colours and styles, but one colour became particularly dear to me: that of the ocean and the sky.

At first all pastels appealed to me, and for a time lilac was the favourite, a girlier version of the dim purple from my past—purple I associated with moodiness, magic and creativity, and what you get when you add cool blue sadness to red hot passion. But then how cute baby pink looked! And how cheerily mimosa yellow sang, like a small bird in spring; and vanilla mint green, ever so soothingly vintage! I noticed muted blues too, but it was not in the lead. I cannot pinpoint what catapulted it to the childish throne of favourite colour but consider it a potent concoction of feeling blue, liking blues music, hearing the word with addictive frequency in Del Rey’s bluesy songs, and seeing her in an array of ’60s-inspired Jackie K-style grey-blue dresses and tops. And I may also have reblogged one too many blue-tinted Tumblr aesthetic posts.

The next thing I knew, everything was, or should be, blue: I bought a grey-blue purse and strand bag because they reminded me of French rooftops; I came to own a dress in every shade of blue, all of them retro and dreamy; I thought often and longingly of Gatsby’s blue lawn, and of the cover of Gatsby itself, whereupon a pair of sad eyes gazed back, teary with longing. The vivid blues of Van Gogh, brightened by his yellows and oranges, fought with the chalky palette of Monet for attention, alongside the yellow-blue of the Italian sky and that unmistakable blue of Grecian domes. Inside shops that sold dreams for the price of your soul I coveted bejewelled pastel blue kicks fit for the modern princess, and inside my head Del Rey sang her quintet of blues. Her poetic lyrics and Fitzgerald’s pretty prose I intended to type out on cream-coloured paper on my 1955 Royal, a baby blue typewriter affectionately named after This Side of Paradise‘s Amory Blaine. I originally planned to purchase it in the pink but switched to blue in the last minute, and when it arrived there was no doubt that blue was the only colour for me—it reminded me of her songs, in which I recognised so much of my own sadness, passion, and rage.

Blue was having a moment and so was I. I felt wed to the colour and like all the colours that came before it became my signifier. At five I wanted to be the princess in pink whose arrival was announced as I ‘gracefully’ descended the stairs; at fifteen the Japanese girls I admired, also in pink; at twenty a hardcore emo kid in black and at twenty-five, a lonely queen lounging in blue, alone with her thoughts and her music.

Feeling, indeed, all my fucking feelings, blue became my favourite colour and tone of song, heralding a new era in wardrobe and interior choices. And you know what? Blue suits me.

3 thoughts on “Girl in blue: a 25-year journey through time and colour”